Johor Bahru, also known as JB, is the capital city of Johor in Southern Malaysia. It is the second largest urban area in Malaysia next to its capital, Kuala Lumpur. Also, it is one of the biggest business centers in the country.

Many people from Singapore visits JB for shopping reasons. If shopping is not your type, there are interesting spots that you can see in JB. You can go around the city by riding a taxi. From JB Central, you need to walk to its adjacent mall City Square. From there, you ride a taxi that will take you to Plaza Kotaraya. The taxi fare is at least 5 RM (Malaysian Ringgit) eight years ago, which is equivalent to 75 Philippine peso. Famous tourist spots are within walking distance from this shopping mall.

Johor Old Chinese Temple is one of the oldest structures in the city of Johor. This temple is a place of devotion and it symbolizes unity among the five groups of Chinese dialects. As you enter the temple, you can see the exhibits of century-old Chinese stuffs. The Chinese characters are posted on the wall including the picture of the famous people in their history. 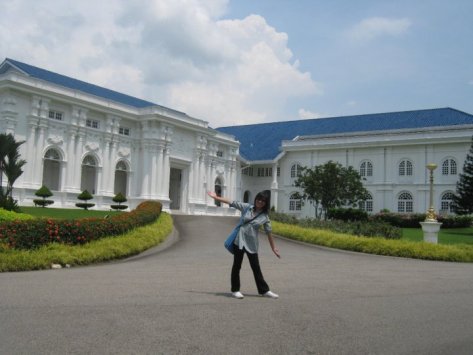 The Grand Palace was built by Sultan Abu Bakr as his official residence. Now, the palace has become an extension of the Royal Abu Bakr Museum. The treasures of the royal collection have been displayed in the palace.

The Royal Abu Bakr Museum is located at the north of the Grand Palace. It displays the exceptional and beautiful treasures from all over the world. However, the exhibit has been transferred to the palace and the museum has been closed.

Sultan Ibrahim Building is a unique structure in Johor Bahru and it symbolizes the country. It is the home of the state secretariat and the other departments of the state government.

Don’t miss to see these places when visiting Johor Bahru! If you are planning to have overnight stay at Johor Bahru, click here to check hotel prices and availability.